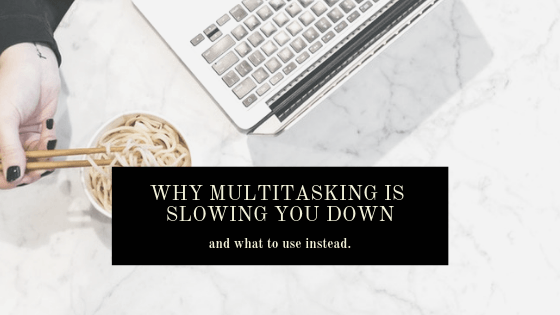 Why Multitasking is Slowing You Down

Why Multitasking is Slowing You Down

How Effective is Multitasking?

Multitasking has always been a farce. Science has proven that humans can only do one task at a time. In fact, the term Multitasking was first used to describe IBM’s computer system capabilities and not human capacity.

What many people might call “multitasking” may actually be something psychologists call “rapid task-switching.” Rapid task-switching is ineffective and is impossible according to Meyers, Educational Psychologist,  in fact, multitasking people not only perform each task less suitably but lose time in the process. Information overload makes us less productive.

Check out more on the Myth of Multitasking on Psychology Today What Can Be Done Instead?

So if multitasking was de-bunked, how can we proficiently complete tasks?  Monotasking! Monotasking is the word coined for doing one task at a time.

Monotasking also referred to as single-tasking or unitasking, is about getting one task done at a time. It’s efficient, productive, and sane, it allows us to do more with less time and energy wasted.

Singletasking is about paying attention with intention as opposed to simply just haphazardly doing multiple things at the same time. How Do You Monotask?

How Is Monotasking done? I compiled a list of things that I do that work well when trying to single task.

Write down what you need to do. Write a list of the things you need to accomplish and when? Writing things down helps remove the clutter in your brain.

Write down the minutes each task should actually take. Trust me, you need to do this part. I don’t know how many times I think something will be a small task and…”two hours later” happens. If a task is too large, break down the task into smaller time increments and space it over a couple of days if possible.

Pick the most important task first (P.S. if you are finding it hard to get going, maybe choose a small task first, this helps to get unstuck). Start with what actually is on the red— Nothing worse than missing a deadline or forgetting to pay something. Getting the important things out-of-the-way will help to make your life easier, no more “Ah S&*t” moments.

Focus on that task only. Don’t veer off, don’t handle anything else but that task. If you find yourself coming across another piece of important work, place it on your list or on your desk for later. But whatever you do continue on your task.

Use mindfulness to help you stay on task. Mindfulness is about focusing only on what is in front of you. Giving it your full attention, seeing the colors of things, feeling the texture of your task, or even smelling what you are cooking or cleaning. The more you gently nudge your mind to the present moment the easier it becomes. I go deeper into Mindfulness HERE.

Take breaks. Don’t forget that rest is just as important as task completion. Rest recharges your energy and mood and allows for a fulfilling day. When you only do work and no play, you began to build resentment for the work, when it was you who chose to withhold that rest from yourself. In fact, I just paused here and took a break, it was time, and now I am back and happier.

Come back to the list of tasks and do it all over again. You build your life in steps, not in one-time chunks. The hardest lesson I had to learn was that change happens for those who do a little each day, not to those who dabble a little here and there.

Should You Do Away With Multitasking?

I don’t think so, I believe that there are moments when a little less brain power is okay such as when; Monotasking is about doing what you need to do when you need to do it and doing it mindfully. Practice giving your attention to your to-do list or with any schedule you set for yourself. But remember to stick to one task at a time and to include mindfulness and rest.

A former nurse and life long self-help learner, I have a passion for teaching the fundamentals of life. I never stop learning, but most of all I never stop being okay with being taught. I am a mom, a wife, and an awakened soul. Welcome! You are never lost, you are just on a quest.

A former nurse and life long self-help learner, I have a passion for teaching the fundamentals of life. I never stop learning, but most of all I never stop being okay with being taught. I am a mom, a wife, and an awakened soul. Welcome! You are never lost, you are just on a quest.

Related Posts From The Blog

The Number One Reason You Should (Do) Journaling for Mental Health

Journaling can help people change their lives. Learn how this simple practice of writing about your life can positively affect your mental health and emotional well-being.

END_OF_DOCUMENT_TOKEN_TO_BE_REPLACED

How Trauma Affects You: The Costs of Ignoring Trauma

What happens when trauma isn’t dealt with properly. And why ignoring this reality will cost you relationships and self-worth.

END_OF_DOCUMENT_TOKEN_TO_BE_REPLACED

6 Real-Life Examples That You Are Prepared To Change

If you find yourself here reading this, you have come to the right place, and you’ve come here out of the need to create change. That in itself is a big clue you are ready to do the work that needs to be done to move forward with your life. Here are 6 signs you are ready for change.